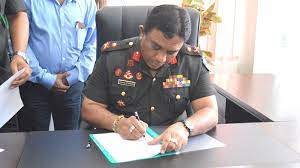 Two hundred and thirty two inmates out of the 500, who escaped from the Kandakadu Drug Treatment and Rehabilitation Centre, yesterday morning, following a clash with soldiers guarding the facility, had been arrested, Maj. Gen. Darshana Hettiarachchi, Commissioner General – Rehabilitation, said.

Hettiarachchi denied allegations from certain quarters that they had allowed inmates to escape to divert public attention away from the burning economic issues, and crippling fuel shortages.

He said an impartial inquiry would be conducted into the death of an inmate.

Hettiarachchi said that they were confident that other escapees too would be arrested soon.

Police Spokesman SSP Nihal Thalduwa said a 36-year-old inmate had died under mysterious circumstances on Tuesday. The deceased was a resident of Mutwal. The death of the inmate had been reported to the Welikanda police, he said.

The Police Spokesman added that a team of policemen from Welikanda had visited the Rehabilitation Centre. However, a large number of inmates had surrounded the body and did not allow anyone near it and that had led to a clash between inmates and the military personnel at the centre.

At around 8 am yesterday, a large group of inmates had broken the two main gates and escaped, he added.

The Police Spokesman said that the police and Army had brought the situation under control, after several hours.

They have also launched a joint operation to arrest the inmates, who are still at large.

There are around 1,000 drug addicts being rehabilitated at the Kandakadu Rehabilitation Center at any given time.

CB Governor gets candid about his salary, perks

Challenges, and need for an all-party govt.