முகப்பு > English > Church of Ceylon calls for the resignation of Prez, PM 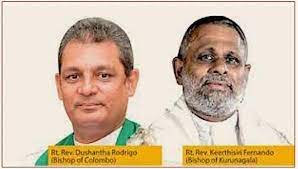 In a statement issued yesterday, the Church of Ceylon joined the Catholic Church and several Buddhist prelates in calling for the resignation of the president and prime minister. A statement signed by the Right Reverend Keerthisiri Fernando, Presiding Bishop of the Church of Ceylon and the Right Reverend Dushantha Rodrigo Bishop of Colombo, said that the President has to take personal responsibility for driving this country to a state of bankruptcy. “We wish to remind the President that a term of office can only be legitimate if the people still have confidence in the individual. The overwhelming call for his resignation from Religious leaders, to Civil society and the average man and woman on the street is a clear reflection that he has no mandate to govern this country anymore…The Prime Minister who never had the legitimacy to hold office. It is clear that there is no plan and no action to revive the economy other than the people having to tighten their belts and die in queues.”

Full text of the statement: We note with deep concern the deterioration of the state of our economy and the sheer sense of apathy with which those in power are approaching the plethora of problems faced by the people of our land. It has been nearly two months since a new Prime Minister was sworn in, much against the wishes of the people and ignoring the advice of Religious Leaders and civil society. The Cabinet that took office thereafter has failed to take any meaningful steps to alleviate the suffering of our people or secure any assistance from any party to improve the state of the economy. The present illegitimate Government is only capable of providing a commentary on the deteriorating state of the country from time to time and warning the people to prepare for worse. There is no plan of action, no clear roadmap or strategy for short, medium- and long-term recovery. It has now come to an absurd point where even the Ministers of this administration are openly calling for the resignation of each other. Clearly, there is no legitimacy for this Government even from within its own ranks.

We are extremely concerned that our people are dying on the streets languishing in fuel queues for days waiting to get a meagre supply of Petrol or Diesel. The supply of Gas and Kerosene for cooking is now a thing of the past. Many small and medium scale industries and businesses have collapsed pushing thousands of people to be out of employment. Our schools remain closed indefinitely causing irreparable damage to the future of our country. We are alarmed that the Police and Armed forces are now using excessive force on unarmed civilians in order to quell the state of chaos which is clearly not their own making. The increasing rate of suicide and crime is indicative of the extent of desperation to which our society has plunged. It is no longer possible for this so-called Government to remain aloof and indifferent to the call of our people. Any Government which cannot command the confidence of its own people will not stand a chance in commanding the respect of outside governments or funding agencies. Furthermore, it is ridiculous to expect outside agencies to bail out Sri Lanka when those who are responsible for corruption and mismanagement are still in control of the country. The lackadaisical attitude of such agencies in responding to the suffering of our people is a clear message that cannot be ignored.

Therefore, we reaffirm our call for the following:

1. The immediate resignation of the President who has to take personal responsibility for driving this country to a state of bankruptcy. We wish to remind the President that a term of office can only be legitimate if the people still have confidence in the individual. The overwhelming call for his resignation from Religious leaders, to Civil society and the average man and woman on the street is a clear reflection that he has no mandate to govern this country anymore.

2. The Immediate resignation of the Prime Minister who never had the legitimacy to hold office. It is clear that there is no plan and no action to revive the economy other than the people having to tighten their belts and die in queues. The past two months has demonstrated the inept inability and incapability of the present administration to grapple with the burning issues of our land. The fact that the situation has only got worse is clearly a testimony to this fact.

3. The formation of a truly representative interim administration which can regain the confidence of our own people and that of the international community. Such administration will be called to manage the present crisis swiftly while devising suitable short, medium and long-term strategies for economic revival. We are convinced that our country has much potential to rise and bounce back strongly if there is agreement on a common framework for governance and support for a realistic plan for economic recovery. Afterall, the vast majority of our people are intelligent, honest and hardworking men and women who have seen their dreams shattered overnight due to no fault of theirs. We must seek leadership which is capable of rallying our people at this time.

4. The urgent enactment of Constitutional reforms to prune down powers of Executive Presidency and reintroduce Independent Commissions. Strengthening the role of Parliament and securing the independence of other institutions which are essential to maintain checks and balances in governance are essential for this nation to progress with dignity. Such reforms should be the result of consensus drawn from all sectors of the people and should necessarily safeguard the interests of all communities.

5. The immediate reopening of schools by providing necessary facilities and prioritized support to function as normal as possible even with difficulty.

We call on the police and armed forces to act with discernment and restraint in the next few days as the people are agitating for their lives and livelihood to be restored. We wish to remind the tri forces and police that their own families have not been spared from suffering and that the future of their own children are also at stake due to the current state of affairs.

The suffering masses will have no option but to intensify their struggle since they are not heard by those selfishly clinging on to power. As a Church, we will support and stand by our people as they engage in peaceful demonstrations commencing from the 8th instant, calling for meaningful change in the direction of our country. We continue to pray for our land and for wisdom to navigate through these difficult times.

Sagara to mobilise ruling MPs for 22A debate