முகப்பு > English > “We are not far from Sri Lanka moment”: Imran Khan 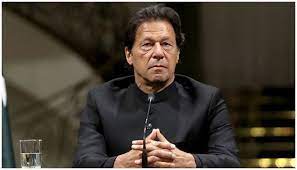 “We are not far from Sri Lanka moment”: Imran Khan

“In just over three months the Zardari – Sharifs’ mafia has brought the country to its knees politically and economically; simply to save their illegally accumulated wealth amassed over 30 years of plundering Pakistan. My question is: how long will state institutions continue to allow this?” he tweeted.

“I can say with certainty after my interaction with our nation and their response to my call for Haqeeqi Azadi that the people of Pakistan have had enough and will not allow these mafias to continue their loot and plunder,” he added.

“We are not far from a Sri Lanka moment when our public pours out into the streets,” Mr Khan said.

A three-member bench of the Supreme Court of Pakistan headed by Chief Justice Umar Ata Bandial summoned Deputy Speaker Punjab Assembly after PTI and PML-Q filed petitions against the victory of Hamza Shahbaz during the election for the Chief Minister of Punjab.

During the hearing, the chief justice remarked that there is nothing in their decision that the deputy speaker mentioned during the assembly proceedings.

“We are here to learn and will summon the deputy speaker so that he could identify the paragraph from the top court’s decision which he used to decide on the matter,” he said.

The Supreme Court has summoned Dost Muhammad Mazari at 2:30 pm today for citing Article 63A of the Constitution and not counting the votes of defecting lawmakers as well as electing Pakistan Muslim League-Nawaz (PML-N) leader Hamza Shahbaz as Punjab Chief Minister.

Leaders of Pakistan Tehreek-e-Insaf (PTI) and Pakistan Muslim League-Quaid (PML-Q) reached the Supreme Court registry in Lahore late at night and submitted a petition against Punjab’s Chief Ministerial election.The petition stated that the ruling violated the top court’s decision with regard to the interpretation of Article 63 A of the Constitution and asked the court to annul the ruling.

Earlier, PML-N’s Shahbaz was re-elected as the chief minister of Punjab after the votes of Pakistan Muslim League-Quaid (PML-Q) were rejected by the Punjab Assembly Deputy Speaker.

On Friday, Pervaiz Elahi – joint candidate of PTI and PML-Q – received 186 votes, while Hamza Shahbaz got 179 votes. However, 10 votes of PML-Q were cancelled by Deputy Speaker Dost Muhammad Mazari, hence taking the figure to 176.

Following the counting of votes, the deputy speaker, citing Article 63A of the Constitution, rejected ten votes cast by the PML-Q members. As a result, Hamza Shahbaz received 179 votes, while Pervaiz Elahi managed to bag 176 votes.Hamza Shehbaz took oath as Punjab Chief Minister on Saturday.

Dr. Jayamaha says Monetary Board acted regardless of strong opposition

HRCSL warns police not to use Police Ordinance against peaceful protesters