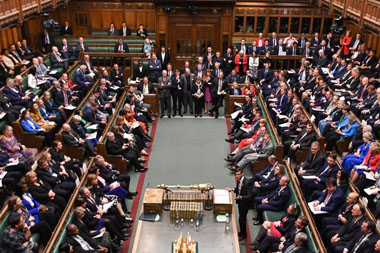 In a Backbench Business Committee debate on the UK response to the human rights and economic situation in Sri Lanka held yesterday in the House of Commons, British MPs called on the UK Government to act on Sri Lanka by way of imposing Magnitsky-style sanctions and refer the country to the International Criminal Court. The MPs also highlighted the need for Sri Lanka to meet its GSP+ commitments and reduce its excessive spending on the military.

Speaking at the debate, Elliot Colburn Conservative MP for Carshalton and Wallington and Chair of the All-Parliamentary Group for Tamils called on the UK Government as a key stakeholder of the International Monetary Fund (IMF), to propose conditionalities on any IMF financial assistance for Sri Lanka.

Among the conditions proposed by Colburn were that Sri Lanka re-engages with the United Nations Human Rights Council process and fully implement resolution 30/1. He also called on the UK Government to implement targeted sanctions against individuals who are credibly accused of committing war crimes during the Sri Lankan Civil War.

Commenting on the UNHRC resolution adopted recently he said: “The new resolution certainly is a step in the right direction to achieving justice and accountability, but – with respect – we have had resolutions before. International action at the Human Rights Council on its own is not enough. The resolution falls short of providing a mechanism to truly investigate war crimes and pursue criminal accountability.” The MP also proposed resources must be raised to build cases against those who are accused of war crimes and to prosecute them.

“Criminal accountability should be pursued by referral to the International Criminal Court. Those who commit war crimes should not enjoy immunity because the state in question is unwilling or unable to prosecute them,” he said.

Siobhain McDonagh, MP for Mitcham and Morden during the debate asked why the latest UN resolution failed to include a referral to the ICC. She also questioned why Britain has failed to impose Magnitsky-style sanctions on any Sri Lankan official implicated in human rights abuses or corruption. McDonagh went on to name Sri Lanka’s Chief of Defence Staff General Shavendra Silva and Secretary to the Ministry of Defence General Kamal Gunaratne as examples.

Also attending the debate former Shadow Chancellor, John McDonnell noted that the country’s poverty was not a natural result but due to the political and military framework of the island. Conservative MP Theresa Villiers stressed that the British Government must find a way to ensure that any bailout from international institutions is accompanied by rigorous efforts to root out cronyism and corruption in Sri Lanka and cut the irrationally large military spending budget.

President says no to Parliament elections until economic crisis is resolved

FSP says no election without a referendum…!

Sagala to hold talks with Indian officials on investments…!