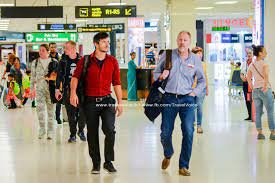 Crushed by an economic crisis due to dwindling foreign reserves and mounting foreign debt, Sri Lanka is desperate to revive the tourism industry, with a target of making 2022 the “Visit Sri Lanka Year” and generating $10 billion from the sector by 2025

Despite fears looming on the tourism industry being impacted by the Russia-Ukraine conflict, Sri Lanka has welcomed nearly 7,000 tourists during the first two days of the month.

As per provisional data released by the Tourism Ministry yesterday, Sri Lanka has received 6,896 tourists within the first two days of March, turning down the distress among the industry which was on its path to recovery post pandemic.

On 1 March, a total of 2,902 travellers and on 2 March, 3,994 visitors arrived in the country. These tourists were led by neighbouring giant — India.

Tourist arrivals have hit a post-COVID all-time high of 96,507 in February, propelling the cumulative figure to-date to 185,730 giving a good start for the year.

Till end of February, the tourist arrivals were led by Russians, however given the current unrest situation, India has emerged as the top source market for the month so far. This has resulted in Russia being pushed to the second rank, whilst Ukraine is no longer among the five or top 10 source markets, as per the latest data released by the Ministry.

During the first two days of March, 1,268 Indian tourists, followed by 885 Russians, 774 Germans, 698 British and 381 Polish travellers arrived in the country.

Although it is too premature to comment on the current impacts to the tourism industry, most industry experts say Sri Lanka could survive with the support of the Indian tourist influx.