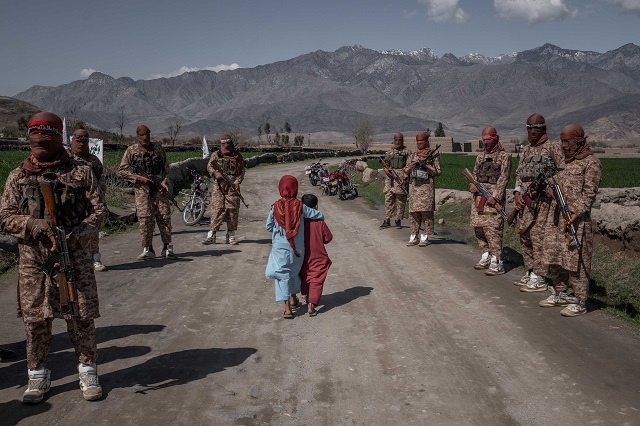 Two boys pass members of a Taliban Red Unit, an elite force, in the Alingar District of Laghman Province in Afghanistan, March 13, 2020. The Taliban stand on the brink of realizing their most fervent desire: U.S. troops leaving Afghanistan. They have given up little of their extremist ideology to do it. (Jim Huylebroek/The New York Times)
English

The confidence of the Islamic extremists are now getting boosted around the world by the “ surrender of the USA and NATO countries”.

The decision of the U S government to withdraw it’s forces from Afghanistan and subsequent announcement that NATO  forces would   also be withdrawn from Afghanistan, should be causing huge concern and uncertainty amongst the  law abiding citizens in Afghanistan, who are millions in number.

Apart from the fact that the decision of the U S government to withdraw forces from Afghanistan is a loss of face for the USA as well as the NATO countries, it is a definite victory for the Islamic terrorists who are entrenched not only in Afghanistan but in several other countries in the world including in Pakistan.

The confidence of the Islamic extremists are now getting boosted around the world by the “ surrender of the USA and NATO countries”.

It is well known that the Islamic extremists have  the clear target of spreading the Islam religion around the world by fair or foul means. Their strategies are not defensive but clearly offensive to achieve their objectives.

The consequences of succumbing to the offences of the Islamic extremists in Afghanistan and the adverse impact would not be confined only to neighbouring countries such as  Pakistan  and India but it would  cause severe   adverse impact on the peaceful conditions around the world.

Many law abiding citizens in Pakistan , capable of matured outlook, are clearly now realizing  that Pakistan is now paying a big price by allowing Islamic extremists  to get well entrenched in Pakistan and due to  the policy of appeasement  by Pakistan government and Pakistan military towards the extremists, who have their way.

As a result , Pakistan has lost it’s reputation as a peaceful country and gained notoriety as a terrorist ridden country.  Caught between the vice like grip of Islamic extremists on the one hand and China on the other hand, law abiding and progressive citizens of  Pakistan  are  facing an unenviable situation.

With Afghanistan going under the control of Islamic extremists, the future target of the extremists would be to achieve complete “Islamisation” of Pakistan  , with Pakistan even  being forced  to shed whatever image it has as a progressive country.

India is already battling against Islamic extremists in Kashmir and the terrorists from Afghanistan and Pakistan soil would certainly increase the intensity of the terrorism. It remains to be seen as to how India would tackle this serious situation.

It is not as if USA and European countries can escape from the consequence  of the panicky decision to withdraw forces from Afghanistan ,after earlier having targeted to eliminate terrorism. The strengthened Islamic terrorists will continue their offensive in USA, Canada  and European countries and they  have positioned themselves well to do so , since millions of people owing allegiance to Islam  ( a few of whom  could be militants ) have migrated to these countries as refugees in the recent past.  Certainly, the threat to peace in European countries, Canada  and USA , which is already showing signs of disturbance,  would seriously become more severe.

How to retrieve the situation now ?

Possibly, the UN General Assembly should consider a proposal  to send peace keeping forces to Afghanistan to maintain peaceful conditions to the extent possible and protect the lives of the  law abiding citizens.

In   many world forums, there have been loud talk by different countries that terrorism should be defeated at any cost but  it has not happened.

The withdrawal of forces by USA and NATO countries from Afghanistan only make it very obvious that fight against terrorism would not yield results sooner or even later.