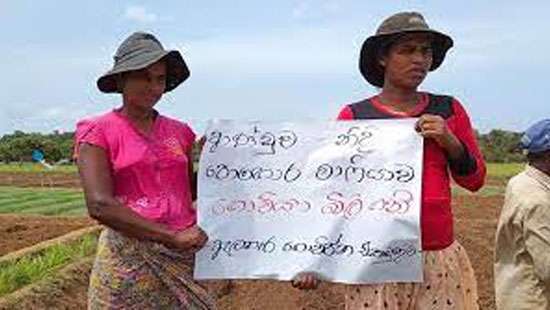 Protests are swarming across the country over the government’s decision to ban chemical fertiliser which had affected the agricultural activities of the local farmers.

A group of farmers of the Elahera Movement were seen staging a protest in Bakamuna today (13), with the participation of more than 600 farmers of the area.

A heated exchange had arisen during the last Season Meeting and farmers’ organisations were of the view that paddy cultivation will not commence until a specific date for the distribution of chemcial fertiliser is announced.

Water will be released for cultivation in the Elahera farming activities on October 25, but the farmers went on saying that cultivation cannot be commenced without fertiliser.

Meanwhile, a group of farmers in Bakamuna masked themselves as Agriculture Minister Mahindananda Aluthgamage and carried a coffin in objection to the recent government decisions. Aluthgamage has no understanding of farming at all, they said.