முகப்பு > English > Mastermind of the Easter attack cannot be investigated. It is a western conspiracy – Gnanasara Thero 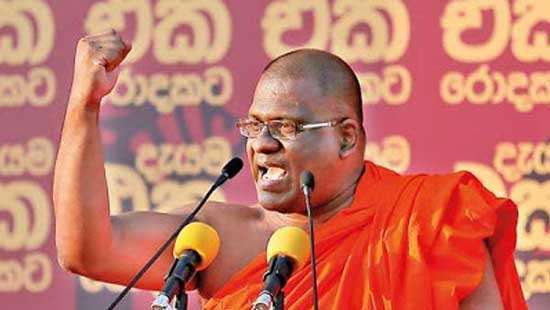 Mastermind of the Easter attack cannot be investigated. It is a western conspiracy – Gnanasara Thero

The General Secretary of the Bodu Bala Sena Galagoda Atte Gnanasara Thera alleges that the Catholic Church and Cardinal Malcolm Ranjith Cardinal are obstructing the current government while identifying those responsible for the Easter attack and punishing them legally.

When the Port city was handed over to China, two bombs explode in Shangri-La. But the cardinal is not talking to anyone about it. The Cardinal is pointing the finger at this government without knowing how these ideologies came to be, how these ideologies were formed, what is the Western agenda, what is regional politics and what is the invisible political hand of the West controlling them released by the West.

I propose to the government that in fact, this Catholic Church has now started playing regarding this Easter attack. If the post of Inspector General of Police, the post of Attorney General and the CID was given over to the Cardinal, he will take care of those responsibilities, right?

They’re also doing someone else’s contract. I say without fear. If there was such a need then, nothing would have happened before 2019. The trauma of people dying should have been before they died. When we say these things. At that time Rizvi was accusing us of touching Muktila’s shoulders. At the time we were saying these things, they were holding hands with Rizvi Mukti and kept accusing us.

No matter who criticizes this government, I seriously believe that the parties responsible for the Easter attack are being identified and the environment is being created to punish them. This is not something that can be done in a hurry. This is a religious issue and it is very complex. “