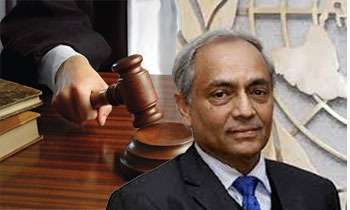 Former Attorney General and Chief Justice Mohan Peiris, who was acquitted of serious corruption and bribery charges due to technical reasons, is contesting for Election of the International Law Commission this year. It has been the subject of intense debate in the international legal community.

He is currently the Permanent Representative of Sri Lanka to the United Nations in New York. In 2015, he was removed from the post of Chief Justice by former President Maithripala Sirisena.

Mohan Peiris’ statement was debated in the international legal field at the time because no other high-ranking official in the world would reach such a level.

He was later charged with corruption and bribery. The international legal community also considers it a serious matter to nominate such individuals to positions of office in reputable bodies such as the International Law Commission.

Meanwhile, the current President Gotabhaya Rajapaksa who visited New York recently was also severely criticized by Sri Lankans living in the United States for his actions.

He was appointed as the new Chief Justice following the impeachment of Chief Justice Shirani Bandaranayake, and the manner in which Mohan Peiris forcibly removed her official residence shortly afterward and took over the place in a short period of time was severely disgusted in the legal field.