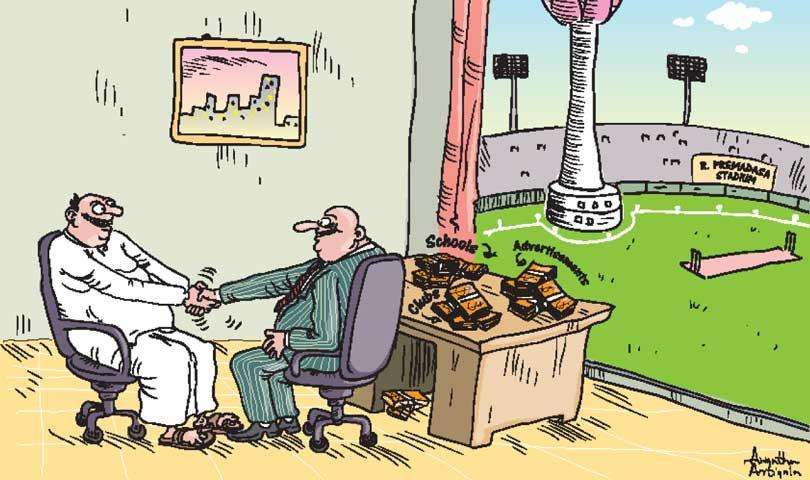 While many Sri Lankans are celebrating the country’s heroics in the Paralympics in Japan, little do they know about what appears to be a major power shift in sports management in the island. Public-Private Partnership, better known as PPP, has been a topic discussed excessively behind closed doors.

The Public-Private Partnership (PPP), a proposal put forward by the Minister of Youth & Sports Namal Rajapaksa, has received cabinet sanction. It allows the private sector companies to manage the high-profile public grounds as well as sports complexes such as the Sugathadasa Stadium and the R. Premadasa International Stadium.

In the history of Sri Lanka’s sports, public grounds and complexes have been managed by government authorities. For instance in 1999, under then Minister of Sports, S.B. Dissanayake, the Sugathadasa National Sports Complex Authority Act had been passed which gives powers to the Sugathadasa Authorities under section 5 to ‘acquire and hold, property, both movable and immovable, and to pledge or sell, mortgage, give on lease or hire, exchange or otherwise dispose of, the same; accept grants, gifts or donations of immovable or movable property from any government, persons or bodies of persons, in or outside Sri Lanka and to enter into, and perform all such contracts and agreements as may be necessary for the purposes of discharging its functions.’

According to Attorney-at-Law Panduka Keerthinanda, the Sugathadasa Authority has been managing ‘indoor and outdoor stadiums at Sugathadasa and also Bogambara Stadium up in Kandy, the Nuwara-Eliya Race Course and even the R. Premadasa Stadium which is currently being leased out to Sri Lanka Cricket – the parent body of the particular sport.

“With the Bogambara Stadium for instance, most of the school sports-meets as well as rugby matches are held, so the young sportsmen are given a proper opportunity to showcase their talent. This is possible right now because it belongs to the government and they charge a very nominal amount,” Keerthinanda told the ‘Daily Mirror’.

However, handing over the powers to the private sector companies could see this change, not necessarily for the better.

“What happens when you give to a private sector company is that all these facilities will get curtailed and obviously they will increase the prices. For instance if you look at the stadiums such as Jayathilake, Digana, Vincent Dias, Durayappah, Kurunegala you have swimming pools where young swimmers have the opportunity to practice for free or for a very small amount, once you give away these stadiums to private sector companies would they allow athletes to access it for free? It’s like in a public canteen a cup of tea is served for what Rs. 30-40, but in a five-star hotel the same could be served for Rs. 1500-2000 – my point is how many sportsmen/women could afford a change of this nature?” questioned Keerthinanda.

On the other hand, in a previous interview with the ‘Daily Mirror’ Minister Rajapaksa claimed that the government could benefit greatly from this saving up to Rs. 1 billion.

“This proposal is to develop the infrastructure around the grounds. This will help fund the maintenance of grounds, which is usually government funded, but we can save up to Rs. 1 billion from the Sports Ministry budget for a two-year period, through implementing this project. What we are looking at is engaging private entities to develop the infrastructure surrounding the grounds and rent out sections of the property, and then use that money to maintain the grounds,” Sports Minister Rajapaksa told the ‘Daily Mirror’.

However, it was uncertain why the private sector companies would want to be a part of this project and further what benefits would they receive out of it.

“We have agreed to lease out the lands for private sector companies for a period of 30 years, so what they could do is they could have their own outlets within the premises and they could also earn through advertising,” the Sports Director General Amal Edirisooriya explained in an interview with the ‘Daily Mirror’.

When questioned about whether the hosting fees for events and entry fee for sportsmen/women could be raised, Edirisooriya claimed ‘No, the private sector companies can’t do that.”

“That is shocking, for the Director General of Sports to say that, it is rubbish. The Director General of Sports is the person who is supposed to be the guardian angel of sports, but this is completely untrue. The private sector companies would obviously run the show, the moment the stadiums are leased out to them for 30 years. If you are going to have a sports culture and sports tourism, the venues have to be developed by the government and give it to the governing bodies such as sports federations and associations because if you host a world cup or a big event like that imagine the income you get out of it. If you give away the venues to private sector for one billion they’ll make much more than that out of the venues” Keerthinanda contended.