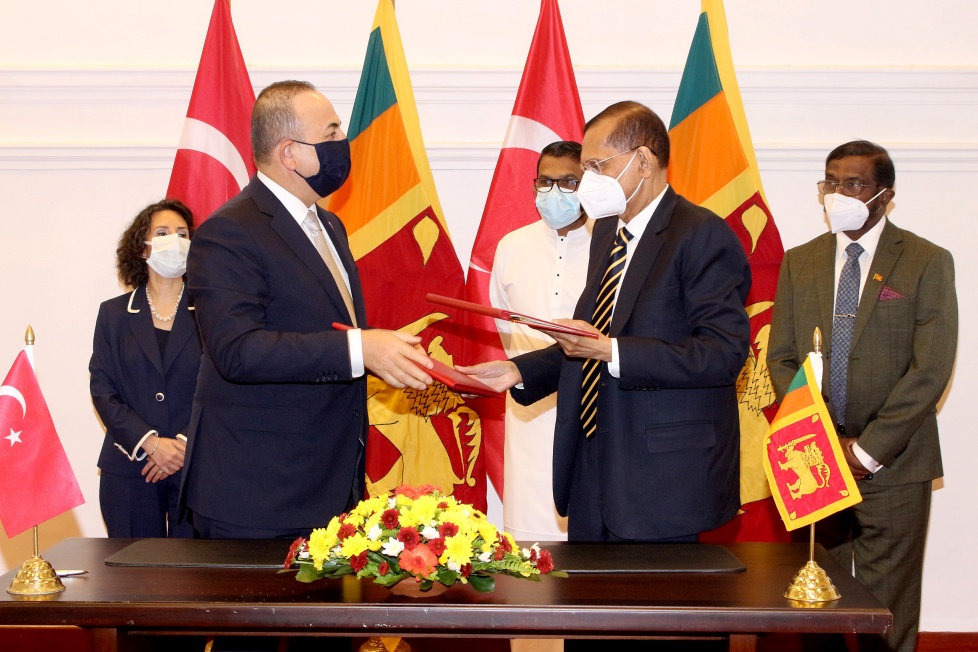 Foreign Minister Prof. G.L. Peiris underscored the ‘warm, cordial and mutually supportive partnership’ existing between Sri Lanka and Turkey at a bilateral meeting with the Foreign Minister of the Republic of Turkey Mevlüt Çavuşoğlu on Friday 28 January, 2022 in Colombo.  In this regard, Minister Peiris welcomed the desire demonstrated by Turkey to forge even closer cooperation with Sri Lanka in the framework of its “Asia Anew Initiative”.  The Turkish Foreign Minister Çavuşoğlu highlighted the importance placed by Turkey in its bilateral relations with Sri Lanka ‘as a friend, ally and valued partner’.

The Sri Lankan Foreign Minister acknowledged with appreciation the principled position maintained by Turkey with regard to the process of reconciliation in Sri Lanka, and the solidarity demonstrated in regional and multilateral fora.  Elaborating further, the Minister emphasised the necessity to address residual issues of reconciliation through a credible, inclusive domestic process, while safeguarding the rights of all communities and people living in Sri Lanka.

The two Foreign Ministers discussed the furtherance of political, economic and cultural relations between the two countries.  Highlighting the importance of economic cooperation, they identified the need to further diversify trade and work steadily towards the achievement of the US$ 500 million per annum trade volume target, as identified at the second session of the Sri Lanka-Turkey Joint Committee on Economic and Technical Cooperation (JCETC) held in June 2021.  The promotion of investment and business-to- business linkages, enhancement of tourism and connectivity, and potential new areas of collaboration were discussed.  Minister Peiris appreciated the role of Turkish Airlines in enhancing connectivity between Sri Lanka and European destinations, thus leading to the promotion of trade and tourism.

In a significant move aimed at expanding cross-border trade and investment, the two Ministers signed an Agreement on the Avoidance of Double Taxation (DTAA) during the visit.

The two Minsters also deliberated on other areas of mutual interest comprising defence, security and counter-terrorism cooperation, and looked forward to the exchange of high-level visits in the future.  Minister Peiris expressed Sri Lanka’s deep appreciation to the Government of Turkey for the medical aid donated through the Turkish Cooperation and Coordination Agency (TIKA) in 2021 to mitigate the impact of the Covid-19 pandemic, as well as the humanitarian assistance extended in terms of housing construction in southern Sri Lanka in the aftermath of the 2004 tsunami.

The State Minister for Regional Cooperation Tharaka Balasuriya, Foreign Secretary Admiral Prof. Jayanath Colombage and senior officials of the Foreign Ministry were present at the bilateral meeting.  Foreign Minister Çavuşoğlu was accompanied by the Ambassador of Turkey to Sri Lanka Demet Şekercioğlu and Advisors to the Foreign Minister.  The Turkish Foreign Minister also paid a courtesy call on the President of Sri Lanka Gotabaya Rajapaksa during the visit.

This was the second visit to Sri Lanka by Foreign Minister Çavuşoğlu, who previously visited in June 2016.

Dr. Jayamaha says Monetary Board acted regardless of strong opposition