முகப்பு > English > ‘One Country, One Law’ proposals: Prez receives report; to be made public after Cabinet clearance 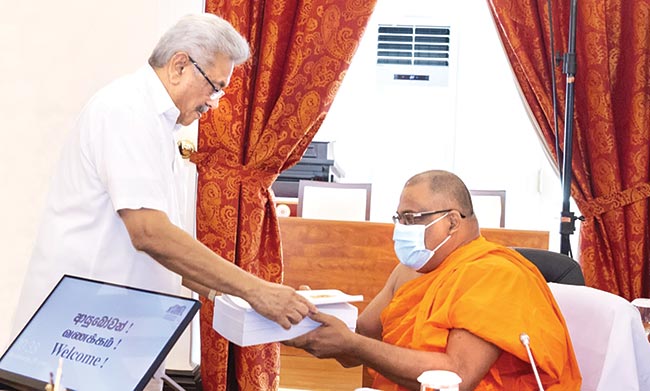 Chairperson of the Women Parliamentarians’ Caucus, Dr. Sudarshini Fernandopulle says accountability and transparency in a parliamentary system have become vital issues as the country makrs the International Day of Parliamentarism today (30).

In a statement issued to the media by the Caucus, Dr Fernandopulle said: International Day of Parliamentarism, which recognises the role of parliaments in national plans and strategies and in ensuring greater transparency and accountability at national and global levels. This Day was first established by the UN General Assembly through a resolution adopted in 2018 which also marked the 129th anniversary of the Inter-Parliamentary Union (IPU). The IPU, which was first established on the same day in the year 1889, is a global organization that works to promote ‘democratic governance, human representation, democratic values, and the civil aspirations of a society’.

This Day further solidifies the unique and enduring system of parliamentary democracy as the standard for political representation. Last year, in 2021, the Day focused on “Youth Empowerment” in Parliament whereas the theme for the International Day of Parliamentarism 2022 is “Public Engagement”. Conspicuously, the word ‘parliament’ originates from the French word ‘parler,’ which means ‘to talk.’ Thus, public discourse and engagement lay the very foundation of the parliamentary system of governance.

At a juncture where public engagement in the democratic process is at an all-time high, the theme for International Day of Parliamentarism aptly suits the current democratic and economic discourse taking place in society.

The Parliament is a cornerstone of any democracy as it must fulfill its fundamental role of providing a voice to the voiceless. The main responsibilities of a Parliament include the formulation, enactment and overseeing of the implementation of laws and policies that are sustainable and crucial for the progression and stability of the country. The Parliament also has a duty to hold the Executive or Government of the country accountable. Accordingly, representing the interests of the public, it must also fulfill the role of acting as a “check” to “balance” the power that the executive holds.

Chairperson of the Women Parliamentarians’ Caucus, Dr. Sudarshini Fernandopulle said: “I believe we should make this Day an occasion to remember the importance of accountability and transparency in a parliamentary system. The Women Parliamentarians’ Caucus recognizes that it has a role to play in initiating a conversation towards realizing a process by which the Parliament can conduct self-evaluation utilising the feedback received by the public discourse. This would be vital in order to gauge the progress the Parliament has made and identify challenges and devise strategies and mechanisms to overcome such challenges to be more representative of the voices of people.”

MP Thalatha Atukorale said: “In the face of crisis, if our parliamentary system fails to realize its purpose, then we must re-evaluate the practices of our Parliament. Therefore, I believe that this Day should be used as an opportunity to formulate an effective strategy to improve transparency and accountability of the Parliament of Sri Lanka.”

Parliament is the bedrock of a functioning democracy. In Sri Lanka, let us realise this goal for all Sri Lankans, leaving no stone unturned to ensure quality of political representation, which means gender equality and social inclusion too.

MP Manjula Dissanayake said: “To be effective and successful, the Parliamentary system must encourage public engagement and must also be based on principles of equality and inclusivity in order to better comprehend and prioritise the needs of the public”.

MP Dr. Harini Amarasuriya said: “We as Parliamentarians must not be oblivious to the fact that the public has lost confidence in the Sri Lankan Parliament and by extension, the Parliamentarians. A strong contention can be and is being made that the Parliament of Sri Lanka falls short of effectively realizing one of its main purposes: to formulate and implement policies and laws that benefits ALL people, particularly the more vulnerable. To meet that end, we must harness public discourse and engagement.”

Sri Lanka fight back with late wickets after Dickwella fifty

No division within SLPP – Kariyawasam…!

KEHELIYA RAMBUKWELLA CLARIFIES THE FACTS REGARDING THE 1 CRORE ELECTRICITY BILL

Govi Hadagasma : Leader of the Opposition meets Cinnamon Farmers in Meetiyagoda ) to discuss their problems

CB Governor gets candid about his salary, perks