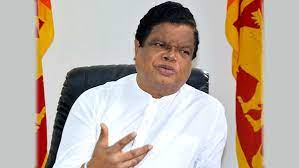 The International Monetary Fund and other lending bodies had asked Sri Lanka not to print more money, and thus the government was finding it impossible to conduct the most basic functions, Cabinet Spokesman Minister Bandula Gunawardane said on Tuesday during the post-Cabinet Press Conference.

Gunawardena said that President Ranil Wickremesinghe had told the Cabinet that five percent of the estimated expenditure in Budget 2023 to all ministries would be curtailed due to resource constraints.

“The President has said that in 2023 the Treasury will face a bigger crisis than previously thought. The main reason is that our economy contracted in 2022 and tax revenue dropped sharply. Expenditure has increased as we have to pay salaries, pensions and interests for money we have borrowed.

Minister Gunawardane said that after paying the salaries and pensions, the government found it difficult to carry out any activity and that the Samurdhi payment for January could be delayed by a week or two.

He said that in the past Sri Lanka had met the revenue shortfall by printing money and borrowing from foreign sources.

“We are in trouble because we printed and borrowed so much in the last 74 years. Now, we can’t pay back the money we have borrowed. Also, the IMF, and other lenders have demanded that we stop printing money. So, the coming months will be tough,” he said.

LG members can be halved to 4,000 before polls – Mahinda Deshapriya